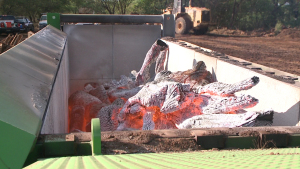 The Hawaii Department of Agriculture says we’re only in the beginning stages of the eradication and it could take years to wipe out.

“This is a very serious pest. It affects not only coconut palms, but all other palms. It will also affect bananas, pineapples, plumerias, so parts of what we know of Hawaii could disappear because of this beetle,” said Rob Curtiss, pest control branch manager for the Hawaii Department of Agriculture.

On Wednesday, KHON2 got a look at a new machine that’s being used to get rid of the beetles and the mess they leave behind.

It’s called an air curtain burner, a large incinerator that can burn any plant or green waste that may be infested with the beetle.

“These are trees that were cut down on base, about 120 of them,” Curtiss said. “We want to burn them before they’re able to get infested. It’s the best method we have of getting rid of the material.”

“It’s quicker. It’s more efficient,” said Lonnie Felsie, Naval Facilities Engineering Command. “It burns and then the residue that’s left is almost nothing. It’s five percent of whatever volume we put inside and so the ashes are almost nothing.”

One air burner costs around $80,000 and shipping it to Hawaii costs about $16,000. The one currently being used is owned by the U.S. Department of Agriculture.

The military also has four air burners on order, and the state Department of Agriculture plans to order one within the next couple of months.

“So we’ll have six of these machines on Oahu, destroying materials that could be infested by CRB,” Curtiss said.

The CRB has also been found at Barbers Point and Campbell Industrial Park, but traps have been placed all across Oahu.

State officials want to make sure it doesn’t spread any further.

“Just be aware of what this insect is and help us out by calling it in if you see something,” Curtiss said.