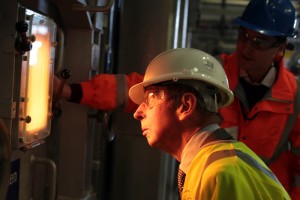 Built as part of the SITA UK, Lend Lease Infrastructure (EMEA) Ltd, and I-Environment Investments Ltd (ITOCHU Corporation), the facility forms part of the consortium’s 25-year waste management contract with the South Tyne & Wear Waste Management Partnership (STWWMP), which comprises Gateshead, South Tyneside and Sunderland councils. Construction of the facility at took three years and was completed in April of this year.

Aerial view of the Billingham site. The new facility (comprising lines four and five) is situated on the left.

Situated adjacent to SITA’s existing three-line EfW facility in Billingham, the two-line plant (pictured, bottom left) can process up to 256,000-tonnes of residual waste per annum, of which, 190,000 tonnes will come from the STWWMP. After being filtered of recyclables, the residual waste will be burnt at high temperatures to produce sufficient electricity to power around 30,000 homes.
It is hoped the facility, which is operated by 42 full-time staff, will allow the three councils to reduce their reliance on landfill and boost their recycling rates. (A further 24 jobs have been created in the operation of three new waste transfer stations developed at Wrekenton in Gateshead, Middlefields in South Tyneside, and Hendon in Sunderland. These allow the waste to be sorted for recycling before loading the residual waste into larger vehicles for transport to Teesside.)

‘Delivering a sustainable source of energy’

Speaking of the visit, David Palmer-Jones, Chief Executive Officer for SITA UK, said: “The South Tyne & Wear Waste Management Partnership’s investment in this new infrastructure shows how local authorities can meet their commitments to divert waste material from landfill and, at the same time, deliver a sustainable source of energy. SITA UK is delighted to play a part in helping the North East put its waste to good use.

“On behalf of SITA UK and the South Tyne & Wear Waste Management Partnership, I am delighted and honoured to welcome His Royal Highness to formally open our new energy-from-waste facility.”

Councillor Peter Mole MBE, Chair of the STWWMP’s Joint Executive Committee, added: “These new developments are the realisation of our very ambitious plans to significantly reduce our reliance on landfill and provide our residents with a greener waste management service. Thanks to these new facilities, we are proud to be able to say that we now divert over 95 per cent of our waste away from landfill and, instead, put it to good use – either by recycling it into new products and compost or treating it to produce electricity. In fact, even the ash that comes from burning the waste is recycled into building materials.”

The opening of the new facility was welcomed by Resource Minister Dan Rogerson, who said: “We are diverting more waste from landfill year on year and I am pleased that South Tyne & Wear Management Partnership’s energy from waste facility is officially up and running.

“As we continue to move towards a more circular economy it is good to see Gateshead, South Tyneside and Sunderland local authorities working together to deliver this commendable example of effective, efficient waste management.”

The £727-million contract was one of the first waste private finance initiative (PFI) projects funded by banks to reach financial close under the competitive dialogue process. The funders include the Green Investment Bank, Credit Agricole, BBVA and Natixis.

SITA has recently submitted planning permission to build a sixth processing line at the same site, and is in the process of building a separate EfW facility in nearby Wilton, as part of SITA Sembcorp’s 30-year Public Private Partnership (PPP) contract with the Merseyside Waste Disposal Authority (MWDA).