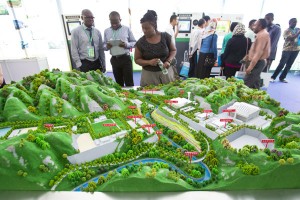 The world’s largest incinerator will ensure that Beijing’s household garbage is not only disposed of in an eco-friendly manner, but also produces electricity for the energy-hungry city.

The world’s largest waste incinerator will start running at full speed next month after one year’s trial run. The incinerator in Beijing’s western suburb can process 3,000 tons of household garbage a day, that is, one-sixth of the daily domestic waste generated in the city.

The Lujiashan incinerator has been built by Shougang Group, one of China’s largest steel producers, in a deserted limestone quarry. Before Lujiashan started its trial run, more than 80 percent of Beijing’s household garbage was consigned to more than 30 landfills spread around the city, with about 10 percent being processed to make fertilizers.

The Lujiashan incinerator will receive sorted household garbage from Dongcheng, Xicheng, Fengtai, Shijingshan and Mentougou districts of Beijing, which will first be dumped into a 30-meter-deep treatment “pond” where it will be left to ferment for a week. The pond, making good use of the limestone quarry, can hold up to 40,000 tons of waste at a time.

The custom-built air-blast system will keep the atmospheric pressure in the pond lower than that outside and thus keep the smell of rotting garbage locked within the pond and spare the neighborhood of the stink. Also, the “fermentation” will increase the waste’s heat generation capacity by a large margin.

After the garbage “ferments”, mechanized buckets will dump it into four incinerators, which are actually waste heat boilers. The incineration will reduce the volume of the garbage by about 90 percent within a short time and the heat generated by the incineration can be transformed into electricity through two 30-megawatt air-cooling turbo-powered generators.

Liu Yangsheng, a professor of environmental sciences at Peking University, says that if the waste’s heat value is more than 4,300 kilo Joules per kilogram, the waste can be incinerated to generate electricity.

Since the average heat generating capacity of Beijing’s household garbage is about 6,800 kilo Joules per kg, it can become a good source of energy for the power-thirsty city. In fact, Lujiashan can generate 420 million kilowatt hour of power in a year, which is equal to that generated by 140,000 tons of standard coal. Moreover, the more than 800 C temperature can eliminate dioxin, a carcinogenic pollutant and a byproduct of outmoded waste incineration technology, from the emissions.

Advanced environmental facilities “cleanse” the emissions from the incinerator in the high-voltage chimney which collects dust and pollutants, and ensures that the emitted fly ash meets national standards. Plus, the solid residue can be used as raw material in the cement industry.

The Lujiashan incinerator was built at record speed. It was completed in two years, in 2012, for a cost of 2.1 billion yuan ($350 million) and was co-funded by Shougang and the Beijing municipal government. Before starting construction, Shougang obtained more than 80 approvals in three months, a process for which similar projects normally require several years. Another advantage of the project is that the land on which the incinerator has come up belongs to Shougang, which saved the company the trouble of seeking the consent of residents in and around the area, which is the standard practice.

No wonder, Shougang is using the project as a showcase for the recycling industry, and the industry administration department has praised it for easing the environmental pressure, even if temporarily, on the Beijing government.

The Beijing local government had promised to build four waste incinerators around Beijing city by 2008, increasing the number to nine before 2015. But local residents’ fierce opposition to such projects because of fear of pollution thwarted the plan. As a result, only one small incinerator could be built in the east of Beijing by 2009.

In the meantime, the waste generated by Beijing residents rose from less than 5 million tons in 2003 to about 7 million tons in 2013, with the volume expected to rise to more than 8 million tons next year. Complicating the situation is the fact that only 13 percent of Beijing’s land area can be used as landfill sites, according to the city’s land use plan, making the use of large areas as landfills impossible. Besides, the side effects of landfills, such as soil and water pollution, are harmful to the environment.

Once the Lujiashan goes into full operation, the Beijing authorities expect 40 percent of the city’s household garbage to end up in incinerators next year. Without Lujiashan, which is part of the local government’s plan, this goal could not have been met.

Although Beijing increased the household garbage disposal fee from 25 yuan per ton to 300 yuan per ton next year, it still cannot cover the cost of waste processing, not least because despite the authorities urging people for the past several years to sort household garbage at source, most of the basic sorting work is done at landfill sites.