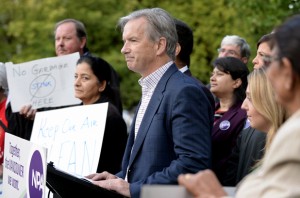 “[Mayor Gregor Robertson’s] plan to build an incinerator without community consultation, without transparency and without actual proven technology is an attack on Vancouver,” LaPointe said at a news conference Thursday.

But the fact is the mayor and Vision Vancouver are staunchly opposed to an incinerator and have made that position very clear to Metro Vancouver, the organization that will decide sometime in 2015 how and where to deal with the region’s garbage.

“We are completely opposed to incineration… it’s great that [the NPA] now also seems to share that position,” Coun. Andrea Reimer said Thursday, adding it’s “frustrating” that the NPA hasn’t come out with any new policies.

Council voted in 2013 to consider using a piece of property at the foot of Main Street and Kent Avenue South for a waste centre, but only if it meets strict environmental and health criteria.

The city’s website states it “does not support garbage incineration facilities, and would not allow the burning of garbage at the proposed facility under any circumstances.”

One of the technologies the city said it would consider is gasification, which has fewer emissions and converts waste to synthetic natural gas.

But LaPointe is also strongly opposed to gasification in city limits, saying it is an unproven technology that poses environmental and health concerns.

Regardless, Metro Vancouver has not yet chosen where to put a waste plant.

“The NPA believes strongly in fighting to keep our air clean and our citizens healthy, but Vancouver’s waste-to-energy plans are likely to generate more emissions and harmful chemicals into the atmosphere,” LaPointe says. “An incinerator or gasification plant is simply not a green option. There are significant health and environmental challenges with both options.”
He says Gregor Robertson and Vision Vancouver, the supposed defenders of all things “green,” are doing nothing to stop the building of a costly new garbage incinerator in Metro Vancouver and are proposing their own “gasification” plant at Main St and Kent Ave. “They have failed to defend the interests of Vancouverites.”

LaPointe says he and an NPA government will fight the plans no matter where the incinerator might be built, and instead concentrate on ways to increase reducing, reusing and recycling the City’s solid waste.
“The only thing less green than burning or “gasifying” garbage in Vancouver is using fossil fuels to ship it elsewhere for burning. We share our air with the region’s other municipalities.”

LaPointe says fiscal concerns accompany the health and emissions worries. “The construction of a new incinerator represents significant risks for taxpayers,” he says, noting its cost of construction has increased by almost $50 million to the current $517 million estimate. “Vision Vancouver’s failure to address the cost issue again demonstrates its failure to manage the City financially.”

The Burnaby waste-to-energy incinerator, which loses money annually, is expected to lose another $16 million in this year.

LaPointe says Metro Vancouver has publicly identified three potential sites for a solid waste incinerator, while six additional, secret sites are under consideration. The City of Vancouver has also proposed a gasification facility in South Vancouver and that has residents concerned.

Jay Jagpal, NPA Park Board candidate and South Vancouver resident, says: “My community is very concerned about the lack of transparency around this project, with its potential to have an impact on so many people. This is typical behaviour of Vision and Vancouverites deserve better.”

Metro Vancouver’s proposed Bylaw 280, a plan to raise costs on waste disposal, is a key step in subsidizing these plants. An NPA government would work to prevent the bylaw from coming into force.