Blog
SIC opts for new mix of burning and recycling

SHETLAND Islands Council is to introduce “door-to-door” recycling of glass and cans next summer – but paper, card and plastic will be burned in the Gremista incinerator after that was found to be the “best practicable environmental option”. 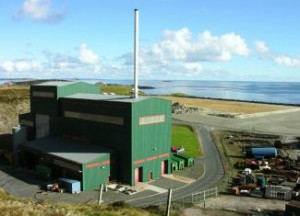 While the notion of burning garbage may seem counterintuitive to those seeking to make the planet greener, the local authority’s stance is backed up – at least in the short term – by Zero Waste Scotland.

The waste-to-energy plant burns material from Shetland, Orkney and occasionally the Highlands, and its output then powers SHEAP’s district heating scheme for homes in Lerwick.

Because Shetland is not connected to the national grid, SHEAP has to make up any shortfall in energy using power generated by oil-fired plants. As a result, the council says, it is less environmentally damaging to incinerate material rather than recycle it.

In April 2013 the council abandoned kerbside collection of recycled material in Lerwick and Scalloway – leaving householders to take plastic, glass, newspapers and cans to collection points instead.

The latest recycling rethink is the upshot of two studies commissioned by Zero Waste Scotland, and will cost the local authority £40,000 more than it presently spends on collecting waste and recyclable materials.

Meanwhile, opening hours for the local authority’s Gremista waste management site are to be cut to allow staff to spend more time sorting industrial waste prior to incineration.

It is to switch to opening between 1pm and 6pm on weekdays and from 11am to 3pm at weekends. That is a significant reduction on the current opening hours of 8am-8pm from Monday to Friday and 9am-5pm on Saturdays and Sundays.

It is expected a charge will be levied on commercial and business premises – accounting for an estimated 20 per cent of waste – for recycling glass and cans.

Infrastructure director Maggie Sandison said changes in legislation left the SIC with no option but to change tack. The situation remains in flux, with further legislative changes expected, and she suspects that in the long term the council will be “recycling more and incinerating less”.

Collecting glass and cans “at least” once a month from every islands household will raise the local authority’s overall recycling rate to around 12 per cent, compared to six per cent at present.

A special derogation from environmental regulator SEPA will be required to allow the energy recovery plant to continue burning hard plastics.

She told members of the environment and transport committee on Monday that the plan was to begin the new recycling collection next summer.

Door-to-door collections will help sort municipal waste, but more staff resources will be required to ensure industrial waste is properly sifted through prior to incineration.

“It will require different staffing,” she told environment and transport committee members. “We’re looking to change the opening hours of the waste management facility in order to redeploy staff to sorting waste rather than just accepting it through the gates.”

Sandison said staff would spend the remainder of 2014 looking at the best way to collect recycling, with an eye to Orkney where a similar door-to-door service was recently rolled out.

While “bring sites” for recycling will no longer be used by the council, Sandison said talks were being held about putting in place more textile banks for the Salvation Army “and they can choose what ones they want to use”.

The committee backed the report’s recommendations without objection on Monday, a move welcomed by chairman Michael Stout.

“There are many, many threads to this,” he said, “and I think from my perspective this gives us the best way out of the particular set of circumstances that we find ourselves in.”

Councillor Steven Coutts said he felt there was an opportunity for the council to be “proactive” in encouraging folk to minimise the amount of waste they generate, meaning there would be less material to recycle or burn in the first place.

Sandison agreed, saying the council should also promote reuse, while government regulations should reduce the extent to which things like fruit and vegetables are “wrapped in vast amounts of plastic”.

“We’ll see less and less [waste] when charges incurred in the manufacture of waste start to make that unattractive,” she said. “There are going to be big changes in waste generation as well as recycling as legislation proceeds.”