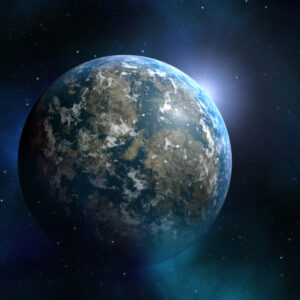 Are we the only ones “out there”? This question and many like it have been asked for years, with no concrete answers available. But as scientists delve further into deep space and discover distant galaxies, the most likely answer seems to be coming more and more into focus: no.

Because, really, how can we be the only intelligent beings in such a vast universe? In recent years, scientists have discovered that “super-Earths,” or other, slightly larger, earth-like terrestrial planets, are far more common than originally thought.

“Super-Earths are expected to have deep oceans that will overflow their basins and inundate the entire surface, but we show this logic to be flawed,” said Nicholas Cowan, a researcher involved in a new study, Water Cycling Between Ocean and Mantle: Super-Earths Need Not Be Waterworlds. “Terrestrial planets have significant amounts of water in their interior. Super-Earths are likely to have shallow oceans to go along with their shallow ocean basins.”

Conventional wisdom has dictated that super-Earths would likely be waterworlds, with their surfaces completely covered in water. But Abbott and Cowan challenge this logic, presenting a new model that shows there could, in fact, be more earthlike planets out there than previously believed.

The study, co-written by Cowan and Doran Abbott, will be published on January 20th in the Astrophysical Journal. According to Abbott’s and Cowan’s model, these planets could store significant amounts of water in their mantles, allowing them to go from being “waterworlds” to having a combination of continents and oceans. This combination of characteristics would likely create a much more stable planet environment, not dissimilar to Earth’s.

Using this “water storage” method, Cowan says, “We can put 80 times more water on a super-Earth and still have its surface look like earth.” He continues, “These massive planets have enormous seafloor pressure, and this force pushes water into the mantle.”